Playing Games at the Easel 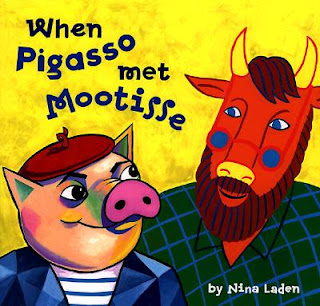 I'm starting to see a new benefit of having a double sided easel as the girls get older; they can paint/draw at the same time and have started making a game out of it!  Their most recent game was inspired by a funny and silly art book they have called, "When Pigasso Met Mootisse," by Nina Laden.  This cute book is about a pig and a bull named Pigasso and Mootisse.  They are modeled after, uh, Picasso and Matisse, and they move out of Paris to get away from the hustle and bustle and end up out in the country across the street from one another.  At first they get along, but then Pigasso criticizes Mootisse's work (or maybe it's the other way around) and they start feuding.  It gets so bad that they build a giant fence to separate their houses. Eventually though they start to miss each other and quietly go out and paint on either side of the fence.  This is the part of the book that influenced the girls in their game.  Tess stood on one side of the easel, and Jo on the other, and they very seriously assumed the roles of "Jo-asso, and Tess-tisse."  Laugh. Out. Loud.  Jo not only insisted on being called Jo-asso but she actually told us we could call her "asso" for short. Never ones to argue with the truly important work of children's play, we agreed! 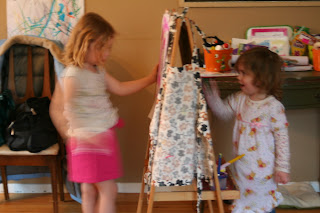 The game was very cute and it inspired both of them to work for a long time on either side of the easel/"fence". This made me think of all sorts of fun things we could do once Tess gets a little older.  It was so interesting to see how different their works were (Tess-tisse painted and Jo-asso used crayon and markers) that I think it would be great to have them both draw a line (for instance), and then see the divergent paths their work would take.  Or to have them both use the same color paint, or crayons, or marker and see what they each came up with.  There are lots of possibilities for sisterly game playing at the easel as they both get a little older!
In the end of the book Pigasso and Mootisse end up friendly again and all the critics love the paintings they made on the fence.  Over here we loved the works Jo-asso and Tess-tisse came up with, although Josephine, ever dedicated to a role, still insists she didn't do the painting, but rather credits "asso" with the work.
Posted by Mary at 8:55 AM