Sugar Snow and some Pop Art

It snowed this afternoon!

Both girls were ecstatic when they
realized the snow was
actually sticking and as soon as she saw that Jo wanted to make "sugar snow." She has been waiting for the chance to scoop up some leaf and dirt flecked snow, pour on some maple syrup, and dig in.She did all that, and indoctrinated Tess to the tradition.

They made two heaping bowls and even got an extra serving of maple syrup when Tess made "syrupy soup" by pouring the remainder of the syrup in the empty bowl while my back was turned.

We also worked on one of our Pop Art inspired projects today.  Working off an idea from MaryAnn Kohl's book, "Discovering Great Artists" the girls drew on pictures of themselves that we printed up.  This was reminiscent of Warhol's images of Marilyn Monroe and Jackie O. 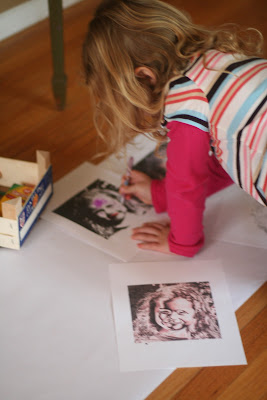 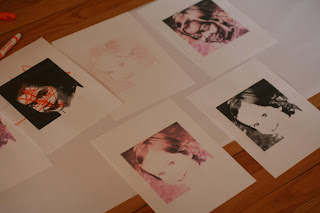 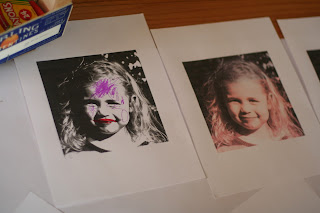 The girls were not as interested in this as I thought they'd be.  I'm leaving it out for a few days to see if any inspiration strikes them.  We have another interesting project to try tomorrow with comics and a magnifying glass!

Soundtrack by Rocknocerous.
Posted by Mary at 3:39 PM