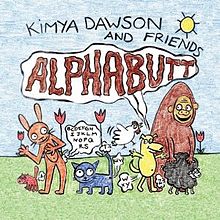 One of my favorite pastimes at this point in my life is finding interesting child appropriate music to listen to during the day, and in the car.  I like having music on all day long, and I really feel like the girls are nicer and more well behaved, and somehow that their play has more focus, when we listen to music.  This is admittedly because I am also nicer and more well behaved when we listen to music.  I mean how can you yell when John and Paul are singing to you about your life of ease, and how you have all you need?  But before I really started looking into it I thought..."kid's" music?  Ugh!"  I was thinking of canned, synthesized, music you might associate with some children's TV shows.  And the girls do like some of that music, but I don't!  Luckily there is plenty of awesome music out there, even music made specifically for kids, not to mention kid friendly music like the Beatles and the Velvet Underground (okay, that one is debatable). 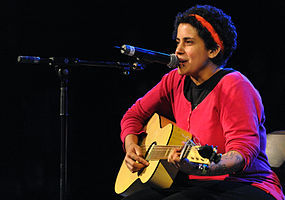 So for this post I'm going to tell you a little about Kimya Dawson.  She usually makes music lumped into a genre called "anti-folk."  I was curious what that meant and discovered that it's kind of anti-60's folk.  Now I love pre-1950's folk music like Woody Guthrie (another super excellent choice for children's music), but I do not (usually) like 1960's folk music (sorry Tim).  So I'm okay with this "anti-folk" designation.

Dawson wrote many of the songs for the soundtrack of Juno, and she used to be in a band called The Moldy Peaches.  The music she plays on Alphabutt is really pared down and simple.  She sings on most of the tracks and plays guitar and she has friends and their children collaborate and they play the xylophone and even a kazoo.  The kazoo really works too, it's funny.  The songs are really catchy and hysterical and some of them are also very sweet.  There is some grousing about corporate greed and a few other adult sentiments, but these songs were written by a woman who named her daughter Panda so you know she has an absolute mandate to sing about corporate greed.  Alphabutt also has some potty humor.  And it's humorous.  How can you resist this for instance:


She also has a song the girls love called, "Pee-Pee in the Potty."  "I Love You Sweet Baby" is a super sweet track, and "Little Monster Babies" is funny and was Jo's favorite for a while.  It's a fun, funny, catchy CD of kid's music that we really enjoy.  You should check it out!
Posted by Mary at 10:12 PM