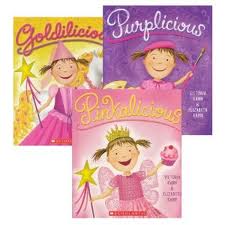 Josephine and Tess both love books and reading them books is something I can (almost) always happily do.  Since she first discovered Fancy Nancy and Pinkalicious Josephine has loved books featuring a little girl (whether human or mouse or badger) and especially a series of books featuring the adventures of a particular little girl.  This is a list of some of our favorite picture books that feature the same little girl as the main character.  If you have any others you like that fit in this category, please share!

Pinkalicious (Victoria Kann) We like this book, and well, honestly Josephine loves this book. Purplicious has some mature themes for the preschool age group but Goldilicious, and Silverlicious are cute, if a little saccharine.

Fancy Nancy (Jane O'Connor) A cute detail is that in one of the more recent books (Fancy Nancy and the Fabulous Fashion Boutique) we learn Nancy's little sister's name is JoJo. There are lots of Fancy Nancy books but I think Jo's favorite is "Bonjour Butterfly." 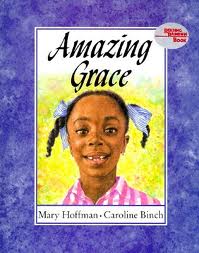 Amazing Grace (Mary Hoffman) Great book about an interesting little girl who assumes the personalities of many of her favorite story book characters even when her classmates tell her she can't. "Princess Grace" is one book in the series and it is great for showing girls (and boys) that there are non-Disneyfied princesses out there.

Yoko (Rosemary Wells) This is a cute series about a kindergarten aged kitten, in a class full of other animals, who has recently relocated from Japan to the US. She brings sushi to share with her friends at school and they decline to try it, making Yoko feel bad. In the end she makes a friend who shares her sushi. In another Yoko book, "Yoko's Paper Cranes," she folds origami cranes to send to her grandparents in Japan, and in "Yoko Writes her Name," she gets teased for writing in Japanese but ends up teaching her classmates to write their names in Japanese. 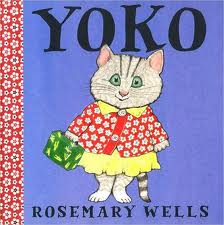 Katie and the Sunflowers (James Mayhew) We really love this set of books! We have not read them all, but they make art come alive when main character Katie visits museums with her grandmother, who falls asleep and leaves Katie to explore the museum on her own. She meets characters inside paintings who step out into the museum to be with her, and also meets characters in famous paintings that she enters into. These books really get you looking at paintings you've probably seen many times and are really engaging.

For instance, in "Katie's Sunday Afternoon," she sees the Seurat painting, A Sunday Afternoon on the Island of La Grande Jatte, and makes friends with the little girl in white you can see in the center of the painting. She notices the monkey in the foreground, and the little girl in white laments that no one in the painting is swimming. It's so cool to imagine getting inside these paintings and meeting the characters.  There are lots of books in this series including, "Katie Meets the Impressionists," "Katie and the Mona Lisa," "Katie's Picture Show," "Katie and the British Artists," and "Katie and the Spanish Princess," among many others. 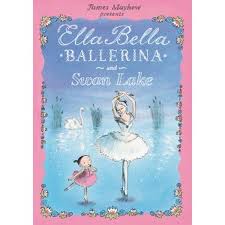 Ella Bella Ballerina and Swan Lake (James Mayhew) This is another nice series of books by James Mayhew about a little girl named Ella Bella. In these books Ella Bella, who loves to dance, is transported into the stories as her teacher Madame Rosa tells her students about the ballets. It's a very accessible way to introduce children to a few classic ballets, including the names of their composers (Prokofiev and Tchaikovsky). In addition to Swan Lake there is one about Cinderella, and one about Sleeping Beauty (the ballet, not the Disney version).

Bread and Jam for Frances (Russell Hoban) These are books starring a stubborn and strong-willed little badger named Frances.  She decides in Bread and Jam for Frances, for instance, that she will only eat bread and jam until she gets totally sick of it and decides she needs to add more variety to her meals.  We also like "A Baby Sister for Frances," and "Bedtime for Frances."  There was also an animated Frances show on for a while that Jo really liked.  The shows were based on the books. 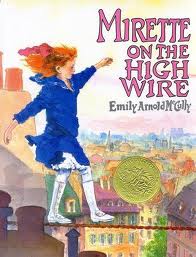 Mirette on the High Wire (Emily Arnold McCully) This series of books is about a determined little girl who lives in her mother's boarding house in France and there meets a famous tightrope walker.  She vows to learn how to walk the wire and sticks with it until she can.  She then helps her mentor overcome his fear of the wire, and goes on tour with him performing all over the world in the follow-up book, "Starring Mirette and Bellini."  There is also, "Mirette and Bellini Cross Niagara Falls."

One Morning In Maine (Robert McCloskey) This wonderful book is about a little girl named Sal who loses her first tooth while clam digging on the coast of Maine with her father. She collects a seagull feather to put under her pillow since she's lost her tooth. She spends the day with her dad and sister Jane, going into town, eating chocolate ice cream, and finally taking their boat home to eat clam chowder. It's nice, and sweet, and really evokes the sights and sounds of Maine on a normal day with two little girls and their dad.  This is the same Sal that stars in "Blueberries for Sal," another great book, which is why I included it here. 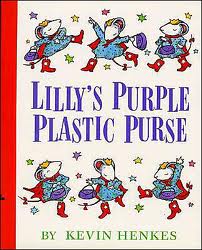 Lilly's Purple Plastic Purse (Kevin Henkes) This is a really funny book about a little mouse named Lilly who loves her teacher, but gets in trouble when her enthusiasm over her new plastic purse gets the better of her at school. Lilly has a really funny and realistic personality and goes through impulsive emotions that I think makes it easy for kids to relate to her. Lilly also stars in "Lilly's Big Day," and Henkes has a few other really cute books starring little girls (well, girl mice) "Chrysanthemum," and "Sheila Rae, the Brave." "Julius the Baby of the World," is about Lilly's little brother, and her reaction to him, and Lilly also shows up in "Chester's Way."

Angelina Ballerina (Katherine Holabird) These are pretty popular books, and Josephine would agree that they should be. They are all about the adventures of a little mouse, Angelina, who loves ballet, and her cast of friends, and little sister.  There are too many Angelina books to name here, but there is also an animated series  on Sprout. 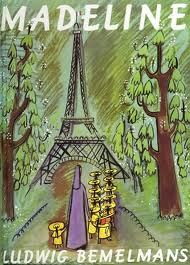 Eloise (Kay Thompson) This is the famous little girl who lives in the Plaza hotel and gets into all sorts of trouble.  She is also hilarious!  I really like these books because they really sound like they are written in the voice of a little six or seven year old girl. This is what Publisher's Weekly said about Eloise back in 1957; "As everyone who can read must know, Eloise is an overprivileged 6-year-old, the terror of the Hotel Plaza in New York. She is also ill-mannered, ill-tempered and ugly. But she has her charm. She often means well, and her mother neglects her. Even though you know that you would do the same thing if she were yours, you can't help finding this appealing."  It is "a book for precocious grown-ups" after all!

Olivia (Ian Falconer) This is a story about another sassy and precocious child who happens to be a pig. I've read descriptions that say Olivia is like Eloise if Eloise were a pig. She's pretty hilarious too and Jo loves both the books and the television show. Watch out though...your kid might start talking like her, and that will drive you (me) crazy! 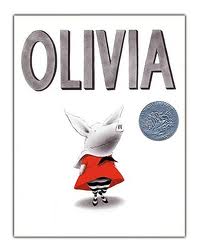 So, what do you think?  Do you have any favorite picture book series starring a little girl?
Posted by Mary at 7:56 PM