A Cute Book and some Insomnia 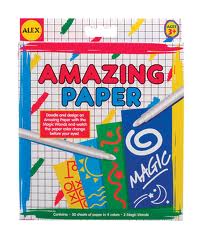 For as long as I can remember I've been a night owl.  If I could I'd go to bed at three am and nap for a few hours each afternoon.  Life hasn't worked out for me to do that without total disruption to my routine (hasn't kept me from trying) since I waited tables, and I think that's one reason I liked working in restaurants. When I stay up late I get less art done with the girls during the day. And for the past week I've stayed up way too late! I always feel, after it gets past midnight and I'm still up, that I'm breaking the law.  I have the feeling that I'm letting myself get away with something I shouldn't.  Perhaps I just discovered why I do it.  I guess if this is all it takes for me to feel subversive than I and my family are lucky.  But I am so tired!


We did use a new art product this week and it's pretty fun.  It's called "Amazing Paper."  It's a little box of paper that comes with two colorless pens.  The paper undergoes some magical change when you write on it, so for instance on the green paper the writing looks orange, even though the pen looks white.  The girls really enjoyed this paper and both made lots of drawings with it. 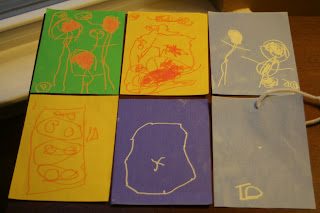 Then we read the book, "The Dot," which is a charming little book about a girl named Vashti.  She suffers some serious self-doubt about her inability to draw until her teacher tells her to, "Just make a mark and see where it takes you."  Such good advice, right?  I'm all grown up (at least if you're counting chronologically) and I still get tripped up making the first mark/taking the first step because I'm worried about the finished product.  Anyway Vashti makes a jab in the picture and her teacher tells her to sign it and then puts it up on the wall.  This validates her but also brings out her competitive side and she gets determined to make a better dot.  This ushers her into her dot period and she makes lots of dot pictures.  She has her work shown and it inspires another little boy.  It's a great book with nice illustrations by Peter Reynolds. 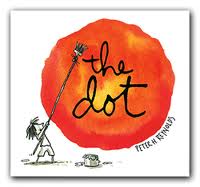 It inspired Jo to make her own dot drawing (above, lower right picture).  She was cute about it because she made a big deal of making the dot and then signing it with her signature J O.  Then she punched a hole in the picture, put a pipe cleaner through it, and it's been hanging on our mantle since.  Good thing we never get around to taking down the Christmas stocking hangers!
The soundtrack for all our rule breaking late nights (and the daytime too) this week is Manu Chao. 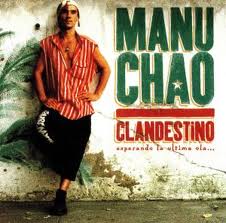 Email ThisBlogThis!Share to TwitterShare to FacebookShare to Pinterest
Labels: Things we make, What we listen to