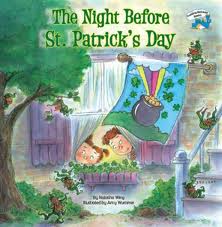 What a week we are having!  The weather has been great and we've been spending as much time outside as possible.  However we have been working on a little something fun this week.  About a month ago I bought the girls a book called, "The Night Before St. Patrick's Day."  It's such a cute book!  In a nutshell it's about a sister and brother who are excited about St. Patrick's Day and in anticipation create some leprechaun traps and set them the night before the holiday.  They think they've caught one, but in the end the leprechaun plays a (basically good-natured) trick on them.  This of course gave us (okay, yes, me especially) the idea to make leprechaun traps here at our house.  The only caveat here is that Josephine has vowed and made me promise to set them up in the basement, not in her room, where the children in the story set theirs up.  For some reason the thought of a mischievous little man, capable of magic flight and prone to playing pranks, flying around her room while she sleeps makes her nervous.  Honestly I think only the hope that she'll make out with some chocolate coins in the end is even keeping her in this game.  But she did have fun decorating her 'trap.'

We used old shoeboxes, green tempera paint, shiny rainbow stickers, glue, glitter, and oil pastels. Basically they each painted a box, I cut a hole in the box with an xacto knife (for the leprechaun to climb in), and then they finished decorating the box with stickers, oil pastels, and glitter.  We plan to dangle gold mardi gras beads from the box to lure the leprechauns.  They like gold, of course! 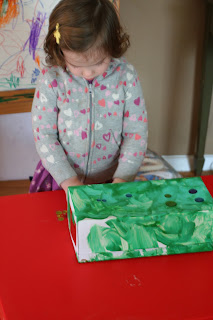 I don't know if this might be one of those signs (you know, where later everyone is like, "ah, yes, the leprechaun traps...I knew then.") that I'm losing it, but I have really enjoyed watching and assisting the girls as they've made these.  I think...I think I might believe. Happy St. Patrick's Day! 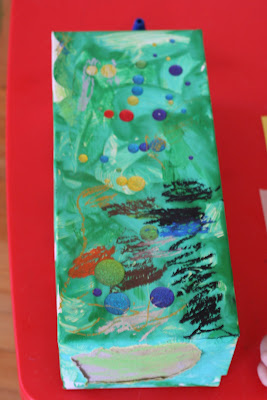 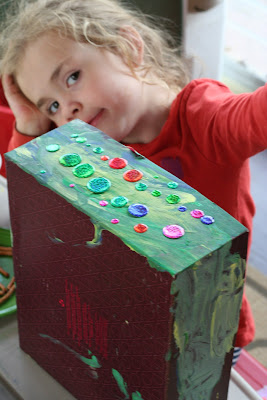 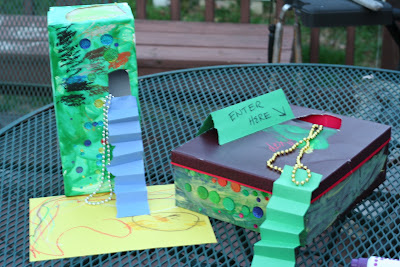