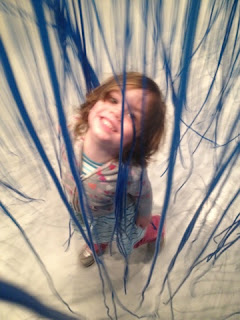 This past week has been spring break here at our house and we've had some fun times. We've had some trials too, oh Super Nanny could pass some judgement (and also just other people in the grocery store, at the library, etc), but overall we've had fun.  We had an exceptional time visiting a new show currently ongoing at the Hirshhorn Museum called Suprasensorial: Experiments in Light, Color, and Space.

The Hirshhorn is a contemporary art museum and a part of the Smithsonian. It's my favorite Smithsonian museum, and the girls usually love it too.  Before I had children I didn't think much about how children experience art museums.  The girls can engage with paintings on a wall in relatively small doses...but contemporary art is often three dimensional, often has fewer elements and simpler lines than other art, and doesn't usually rely on some understanding of a narrative to engage with the work. Other than the fact that the subject matter can sometimes be too mature, or at least hard to explain, I think contemporary art is so fun to experience with children. 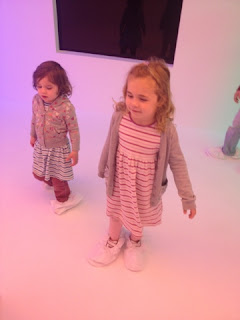 This new show is no exception and is even better than most because it's interactive! You can touch stuff. And while the adults stand around looking at one another awkwardly, the kids dive right in. They had absolutely no qualms about walking into a cube shaped room with a Jimi Hendrix soundtrack blaring, plopping themselves down on one of the many mattresses laid on the floor, heads comfy on a pillow. None of them picked up the emery boards laid conveniently on each pillow and filed their nails (but you can if you go and you should!) but otherwise they accepted the whole thing as if, of course you can lay down on mattresses in the middle of an art gallery. That is why experiencing this with kids is so great. SPOILER ALERT: there are pictures of newspaper clippings projected onto screens in the mattress room and the artist outlined some of the features of the people with cocaine. It wasn't obvious to our little kids though. Unless it was but that hasn't come up yet. Something for the kindergarten teacher, perhaps? 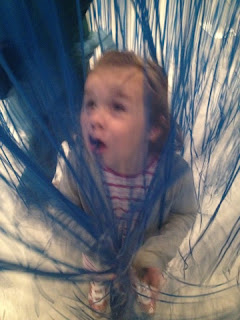 The kids favorite part was running through a piece called Blue Penetrable BBL. This work consists of many cords (they are made of some rubbery feeling material though, not cloth) suspended from the ceiling in the center of a room. Walking though the space is amazing; it's disorienting, and really otherworldly. It's a very cool sensation, although trying to keep track of my two kids made me dizzy. You are left feeling like the whole room is pulsing with movement and light. I loved it! But, I do think it may have given me a migraine. The children could have spent all day just walking though that piece.

The other cool thing we did was re-visit the Dan Flavin piece and use some highlighter pens to make glowing drawings in the gallery. The highlighters looked so much like they were glowing in the bright blue light that people were stopping to ask where we'd bought them! The whole experience was so very fun and unique and if you are anywhere near the DC area you have to check this out and take your kids! 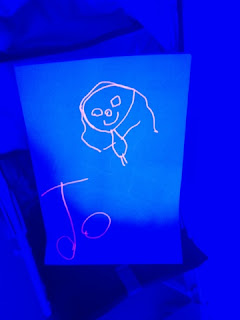 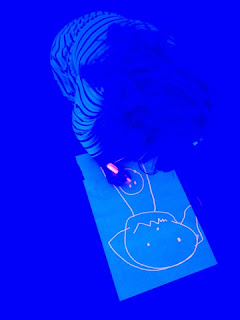 Email ThisBlogThis!Share to TwitterShare to FacebookShare to Pinterest
Labels: Places we go, Stuff we say, Things we make