Nine hours with a toddler who doesn't nap is a long time.  And some things, which in the first three hours, or even in the second three, might not sound like good ideas begin to seem reasonable and even like great ideas once hour seven rolls around.  So it was with this activity!  Yesterday afternoon was nice and warm and I really wanted the girls to get fresh air.  So, to add extra excitement to going outside in the backyard I put together a little 'station' on our deck where they could make a pretend cake.  It consisted of pots, whisks, measuring spoons and cups, a cookie sheet, some water, flour, an egg carton, and some spice jars filled with baking soda.  At least that's how we started. 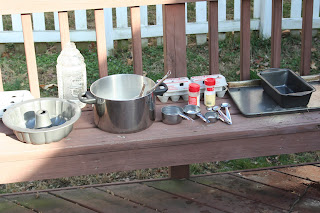 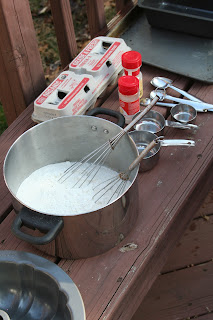 The girls were pretty excited about this.  At first they weren't sure what to do, but when I explained they could do whatever they wanted they went right to it. 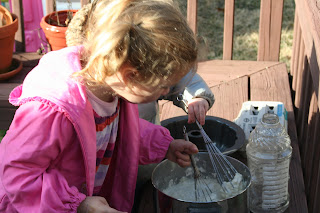 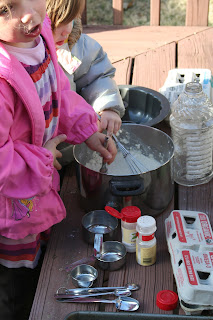 They worked and worked, and then decided they needed sprinkles.  I gave them a few and they came back in a little while later for chocolate chips, which I gave them. Through this process I ended up giving them more flour, water, and finally a banana to add to their cake.  This is not something I'd do every day because you can imagine the clean up was a bit involved, but they had fun, and stayed outside for a long time 'baking'. 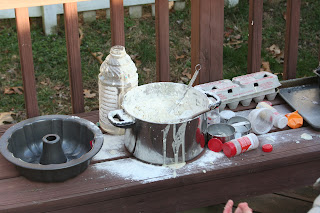 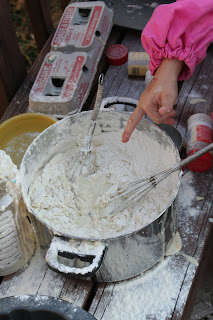 Email ThisBlogThis!Share to TwitterShare to FacebookShare to Pinterest
Labels: Things we eat, Things we make